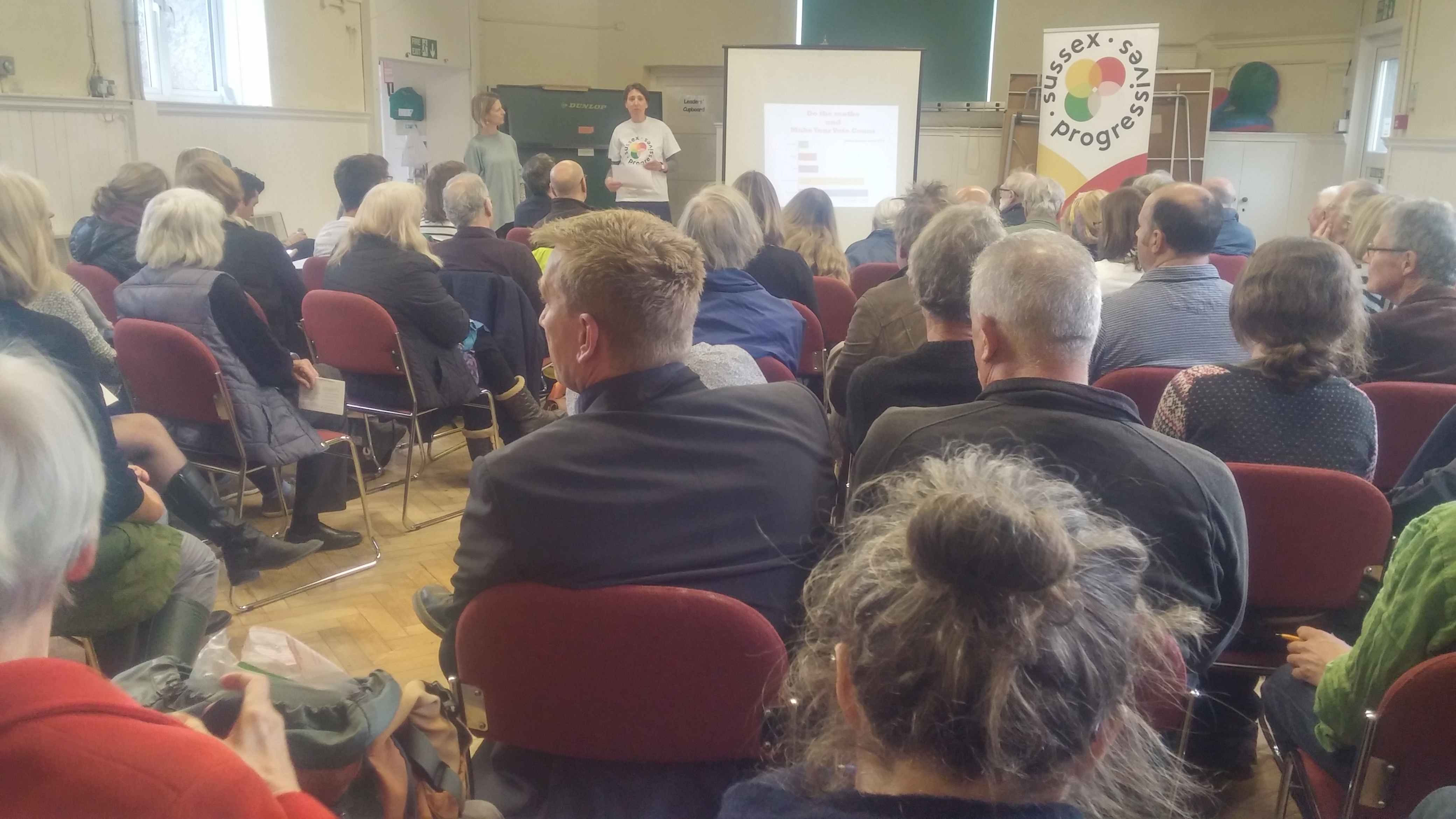 A progressive alliance in Lewes – and beyond

Last night I attended the Progressive Alliance event in Lewes, my home town.

It was not just well attended – it was packed. There was standing room only, at a hastily-assembled event that had only been publicised for a few days.

The evening had everything – from the ejection of a rather over-refreshed gentleman by the local constabulary to a major (and very welcome) surprise to round the evening off.

It all contributed to the feel of an old-fashioned ‘town hall’ political meeting – which is exactly what it was. It felt like we were doing politics in the right way.  A range of people – some loyal to particular parties, others not – openly discussing their views and trying to work together to take action for the common good. Isn’t that what politics is supposed to be about?

When the organisers asked members of the audience what had motivated them to attend the meeting, a range of reasons were given, including concerns about the state of the NHS, fears of a hard Brexit, the environment and simply the overall desire to work together in a practical way to make Lewes better.

People also shared their concerns about voting tactically in the forthcoming General Election – including being burnt last time they did it in Lewes and their sense of feeling let down by the Liberal Democrats during their time in the coalition government. It was clear that it’s not always easy for conscientious, caring people to put aside their party loyalties or their suspicion about other parties or individuals within them (whether it’s the local candidate or the leader) as voting is something to be taken seriously – a solemn responsibility.

But there was also general agreement that when the stakes are this high we need to make sacrifices – even if voting for another party seems alien or even uncomfortable for us. We only have ourselves to blame if we fail to overcome our relatively minor differences in order to unite against the massive threat in front of us, as the consequences of a big Tory win are frightening. An increasingly hard-right, hard-Brexit government committed to further dismantling the public services that so many of us rely on, and exacerbating the already shocking economic inequality in this country. What’s more – a government with a strong majority, being able to do this with impunity for five years, and probably more.

Ultimately the message from every speaker was very clear – the time has come to put aside tribal political concerns or any gripes about other progressive parties, as these pale into insignificance against the main aim – to stop the Tories winning the seat in Lewes and strengthening their overall majority in the country.

As if to illustrate this, a couple of important things happened towards the end of the evening.

First, the Lewes Green Party candidate, Katie Hawks, announced that she would be standing down in the General Election on June 8th, to help build the strongest possible alliance behind the Lib Dems to oppose the Conservative candidate. The ovation that greeted this news showed how much people appreciated this willingness to put country before party on this occasion, and stand down for the common good.

Second, the evening ended with people coming together to set up at least 15 different events and campaigns around Lewes in the next month to encourage people to ‘vote smart’ in the General Election on June 8th. Reassuringly, many of these events involve the consumption of cake – a cross-party issue, if ever there was one. If you’d like to get involved in any of these events you can find out more at LewesProgressives@gmail.com.

So, let’s all follow these examples.  Let’s unite behind the values we share and vote smart in Lewes on June 8th – vote Lib Dem.

Next ArticleWhy we should keep working for a Progressive Alliance